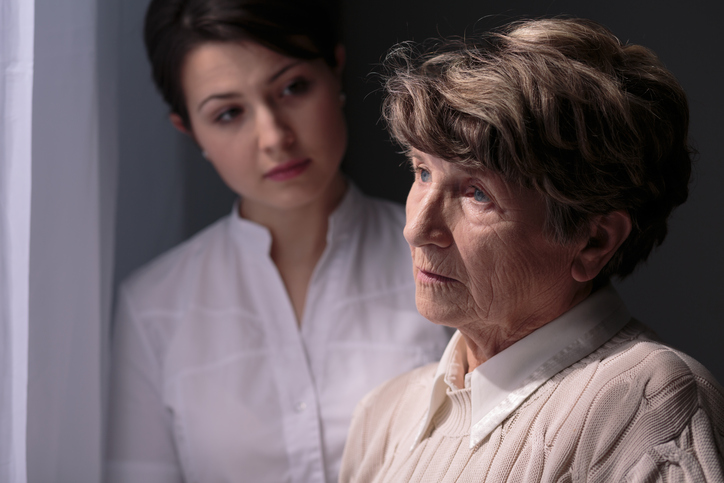 Often, people use the terms dementia and Alzheimer’s interchangeably, but they’re not the same thing. The confusion is understandable because they’re closely related, but if you’re beginning to face dementia in an elderly parent, it’s important to understand the difference. The easiest way to look at the two terms is by understanding that dementia is a broad term for symptoms caused by a group of disorders, and Alzheimer’s is one of those disorders.

People with dementia have trouble thinking clearly, remembering things, and controlling their emotions. Often associated with aging, dementia can be caused by a variety of disorders, including Huntington’s disease, Parkinson’s disease and Creutzfeldt-Jakob disease. It can also result from things like infection or injury, and sometimes, people can suffer from more than one type of dementia. Dementia is sometimes temporary or reversible, as is the case when it’s caused by a drug interaction or vitamin deficiency.

As of now, Alzheimer’s disease is incurable. The most common form of dementia, its symptoms include confusion and impaired thought and speech. It’s a progressive disease, and in patients with Alzheimer’s, dementia symptoms worsen over time. While those in the early stages may just experience mild memory loss, as the disease progresses everyday tasks and even conversation will become more difficult. Patients can become confused, aggressive, and have sudden mood changes.

While dementia has many causes, Alzheimer’s occurs when proteins, known as plaques, and fibers called tangles build up in the brain. These plaques and tangles destroy nerve cells and block nerve signals. Alzheimer’s can be diagnosed through tests of attention, memory, language, and vision, and examination of images of the brain captured by an MRI.

Treatment for the symptoms of Alzheimer’s can temporarily slow the worsening of the dementia associated with the disease. This improves the quality of life, not just for Alzheimer’s patients, but also for those who love and care for them. Research is ongoing across the globe, for better ways to treat the disease, with the eventual hope of preventing it from developing in the first place.

Caring for an elderly parent with Alzheimer’s or dementia can be challenging, but Elder Care Connections has the resources to help. We’re a boutique-style agency, committed to helping people find the right care for their loved ones. We pride ourselves on helping you find a caregiver who is not only capable but also compatible with your loved one’s personality. Contact us for an in-home evaluation, or to learn about all we have to offer.